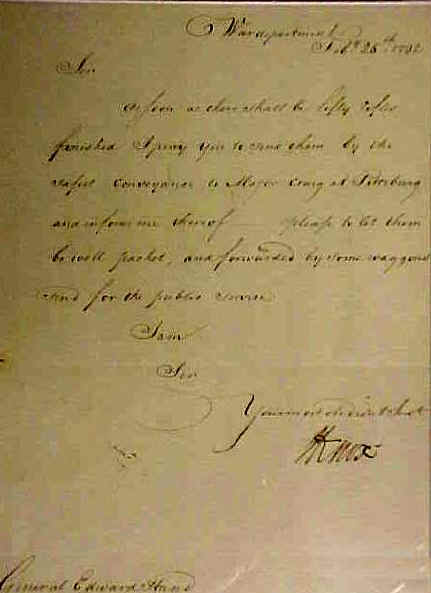 Letter signed as Secretary of War, Feb. 25, 1792 toG eneral Edward Hand "As soon as there shall be fifty rifles finished I pray you send them by the safest conveyance to Major Craig at Pittsburg …". .

According to Fred Nehring: "After the war, Knox acquired through his influence, rights to the "Waldo patent" for $5 per hundred acres and began threatening the settlers there with eviction if they did not pay him outrageous sums ($3 to 5 per acre) for the lands they fought for and developed.
There was quite a bit of civil unrest due to the extortive offer in the area he acquired; but because he had the influence; the state upheld his claim to the lands, spurious though it was.  Out of the outrage of his actions, 3 towns that were finally chartered were named Freedom, Liberty and Unity.
His 'vision' was one of personal greed. He was no hero of the common man.  See 'Liberty Men and great Proprietors' by Alan Taylor."

Virtualology is not affiliated with the authors of these links nor responsible for each Link's content.

The Salisbury Association, Inc. - HENRY KNOX
... Bookseller HENRY KNOX. On April 19, 1775, Henry Knox (age 25) was working in his
bookshop in Boston. A few months before, Know married the daughter of the Royal ...

Henry Knox
Henry Knox. HENRY KNOX was born in Boston, Massachusetts, on 25 July 1750; upon his
father’s death left school at twelve to work in a bookstore; joined a local ...