For a High-resolution version of the Stone Engraving

THORNTON, Matthew, signer of the Declaration of Independence, born in Ireland about 1714; died in Newburyport, Massachusetts, 24 June, 1803. When he was two or three years old his father, James, emigrated to New England, residing for a few years at Wiseasset, Maine, and afterward at Worcester, Massachusetts, where the son received a classical education. He studied medicine in Leicester, practiced in Londonderry, New Hampshire, and soon became wealthy, he accompanied the New Hampshire troops in the expedition against Louisburg in the capacity of surgeon. He was appointed a justice of the peace, and before the Revolution was a colonel. Taking an active part in the overthrow of the royal government in New Hampshire, Dr. Thornton was chosen president of the Provincial convention when it assembled in 1775. He was chief justice of the court of common pleas, and from 1776 till 1782 a judge of the superior court of New Hampshire. He was elected speaker of the assembly on 5 January, 1776, and on 12 September the legislature chose him as a delegate to the Continental congress. As in the case of the delegates from Pennsylvania, he was allowed to affix his name to the engrossed copy of the Declaration of Independence, although he was elected after its passage, and did not take his seat till 4 November, 1776.

In December he was again chosen to represent New Hampshire in congress for another year. He removed to Exeter in 1779, and shortly afterward settled on a farm at Merrimack, relinquishing medical practice. He was elected a member of the general court, then a state senator, and in 1785 was appointed a member of the council. From the adoption of the state constitution till his death he was a justice of the peace. He wrote political articles for the newspapers, even after the age of eighty, and in his last days composed a metaphysical work on the origin of sin, which was never published. In 1887 the legislature of New Hampshire voted $1,000 for a monument to be placed over his grave in Merrimack. 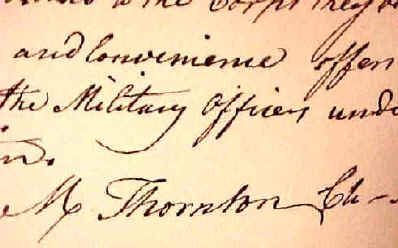 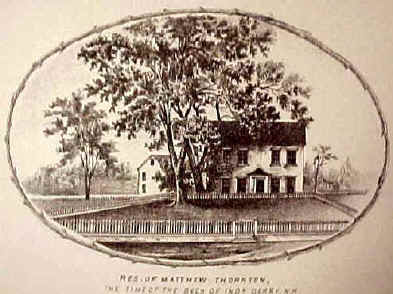 Start your search on Matthew Thornton.