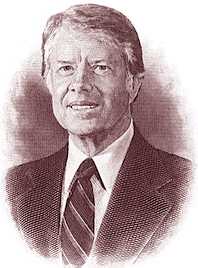 JAMES EARL CARTER, JR. was born in Plains, Georgia on October 1, 1924. He was the eldest of the four children of James Earl Carter and Lillian Gordy Carter. His father was a peanut farmer and operated a small country store in the tiny farming community of 600 people and his mother was a nurse. Carter attended the local schools in Plains and graduated from Plains High School in 1941. He enrolled in Georgia Southwestern College, being the first member of his family ever to go to college. After a year, he enrolled in the Georgia Institute of Technology. As a boy, Carter received postcards of exotic ports sent by his uncle who was in the Navy, and he dreamed of attending the Naval Academy in Annapolis Maryland. His dream came true when he received an appointment through his local congressman. He graduated 59th in a class of 820 in 1946.

On July 7, 1946, Carter married Eleanor Rosalynn Smith, a girl he had know since high school who was his sister Ruth’s classmate and friend. The two had started dating the previous summer when Carter was home on leave from the Naval Academy. The couple had four children: John William (Jack) born July 3, 1947 in Portsmouth, Virginia; James Earl III (Chip) born April 12, 1950 in Honolulu, Hawaii; Donnel Jeffrey (Jeff) born August 18, 1952 in New London, Connecticut; and Amy Lynn born October 19, 1967 in Plains, Georgia.

Carter’s naval career began with service on battleships, and after two years he was accepted for submarine duty. He was assigned to the nuclear submarine Sea Wolf and later worked for Admiral Hyman Rickover, who made a lasting impression on Carter, on a nuclear engineering project. In 1952 Carter enrolled at Union College in Schenectady, New York, studying nuclear physics.

In 1953 at the death of his father, Carter resigned from the Navy and the family moved back to Plains, Georgia, to run the family business. They lived in public housing for the first year, with Carter running the business and his wife doing the bookkeeping. The first couple years were not easy but Carter became successful, starting a fertilizer business, a farm-supply operation, increasing his landholdings and acquiring a cotton gin and a peanut shelling plant. Carter’s political career began as he was establishing himself as a businessman. His father had always been politically active and in 1960 Carter won his first elective office, a seat on the local school board. When a new state senatorial district was created in the area during the legislative reapportionment of 1962, Carter decided to run for the seat. At first, it was believed that Carter had lost, but he proved that his opponent in the primary had broken voting laws by blatantly stuffing the ballot box. The resulting legal battle brought him victory in the primary and in the general election. He served two terms in the state senate and in 1966, he ran for the Democratic nomination for governor of Georgia. He came in third, but immediately began to prepare for the 1970 campaign. He defeated former governor Carl Sanders in the primary and was elected governor in the November general election.

Carter was not eligible for a second term as governor, so about halfway through his four-year term, he decided he would seek the presidency of the United States. He began an exhausting schedule of campaigning as soon as his term ended, sensing the mood of the country was anti-Washington and the people were interested in an outsider who was untainted by the insider politics of the Nixon era. Carter promised to restore honesty and morality to the federal government. He gained credibility with early primary victories and received immediate attention from the press. He won the nomination on the first ballot of the Democratic National Convention in New York and chose Senator Walter Mondale of Minnesota as his running mate. Carter achieved a narrow victory in the November, 1976 general elections by sweeping most of the South, winning 297 electoral votes to incumbent Gerald R. Ford’s 241 and 40.8 million popular votes to Ford’s 39.1 million.

Carter was inaugurated on January 20, 1977, and after taking the oath of office, he and his family walked to the White House. One of Carter’s first acts as President was to pardon the Vietnam draft dodgers. He decreased the federal budget deficit, deregulated domestic oil prices and formed a Department of Energy. He improved bureaucratic efficiency and placed many women and racial minorities in senior government jobs. In foreign affairs, Carter stressed human rights as a principle of American policy. He facilitated the historic Camp David agreement between Egypt and Israel and the treaty ceding the Panama Canal.

Carter faced his first major foreign policy problem in 1979. That January, Mohammad Reza Shah Pahlavi, who had ruled Iran for 37 years, was forced to flee the country in a takeover by followers of Ayatollah Ruhollah Khomeini, a Muslim clergyman. In November 1979, militant Iranian students stormed the U. S. embassy in Tehran, the capital of Iran. They took 66 Americans hostage. They soon released 13, but demanded a U.S. apology by the U.S. government for its support of the shah, his return to stand trial and the return of the billions of dollars he was said to have been hiding, before they would release the other 53 hostages. More than a year of negotiations with the militants did not secure their release, nor did a U.S. commando raid the following April. He had inherited an economy that was slowly emerging from a recession and he had severely criticized former President Ford fro his failures to control inflation and relieve unemployment. After four years of the Carter administration, both inflation and unemployment were worse than when he started. His relationship with the Congress, which was controlled by the Democrats, was often very strained.

Ironically, Carter’s last major official action was to secure the release of the 53 American hostages in Iran. They were freed on January 20, 1981, the day of Ronald Reagan’s inauguration.

Carter returned to his home in Plains, Georgia. He continues to remain active in human rights issues and has become the public spokesperson for numerous charitable causes, including Habitat for Humanity, which helps build low-income housing. He has written more than eleven books and teaches Sunday School and is a deacon in the Marantha Baptist Church of Plains, Georgia.