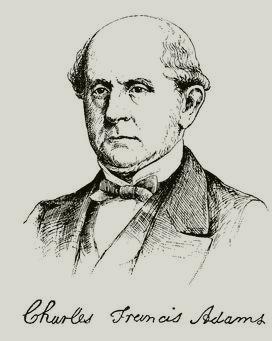 ADAMS, Charles Francis, diplomatist, son of John Quincy Adams, born in Boston, 18 August, 1807 ; died there, 21 November, 1886. When two years old his father took him to St. Petersburg, where he learned German, French, and Russian. Early in 1815 he traveled all the way from St. Petersburg to Paris with his mother in a private carriage, a difficult journey at that time, and not unattended with danger. His father was soon afterward appointed minister to England, and the little boy was placed at an English boarding school. The feelings between British and Americans were then more hostile than ever before or since, and young Adams was frequently called upon to defend with his fists the good name of his country. When he returned after two years to America, his father placed him in the Boston Latin School, and he was graduated at Harvard College in 1825, shortly after his father's inauguration as president of the United States. He spent two years in Washington, and then returned to Boston, where he studied law in the office of Daniel Webster, and was admitted to the Suffolk bar in 1828. The next year he married the youngest daughter of Peter Chardon Brooks, whose elder daughters were married to Edward Everett and Hey. Nathaniel Frothingham. From 1831 to 1836 Mr. Adams served in the Massachusetts legislature. He was a member of the Whig party, but, like all the rest of his vigorous and free-thinking family, he was extremely independent in politics and inclined to strike out into new paths in advance of the public sentiment. After 1836 he came to differ more and more widely with the leaders of the Whig party with whom he had hitherto acted. In 1848 the newly organized free-soil party, consisting largely of democrats, held its convention at Buffalo and nominated Martin Van Buren for president and Charles Francis Adams for vice-president. There was no hope of electing these candidates, but this little party grew, six years later, into the great Republican Party. In 1858 the republicans of the 3d district of Massachusetts elected him to congress, and in 1860 he was reelected. In the spring of 1861 President Lincoln appointed him minister to England, a place that both his father and his grandfather had filled before him. Mr. Adams had now to fight with tongue and pen for his country as in schoolboy days he had fought with fists. It was an exceedingly difficult time for an American minister in England. Though there was much sympathy for the United States government on the part of the workmen in the manufacturing districts and of many of the liberal constituencies, especially in Scotland, on the other hand the feeling of the governing classes and of polite society in London was either actively hostile to us or coldly indifferent. Even those students of history and politics who were most friendly to us failed utterly to comprehend the true character of the sublime struggle in which we were engaged--as may be seen in reading the introduction to Mr. E. A. Freeman's elaborate " History of Federal Government, from the Formation of the Achaean League to the Disruption of the United States" (London, 1862). Difficult and embarrassing questions arose in connection with the capture of the confederate commissioners Mason and Slidell, the negligence of Lord Palmerston's government in allowing the "Alabama" and other confederate cruisers to sail from British ports to prey upon American commerce, and the ever manifest desire of Napoleon III. to persuade Great Britain to join him in an acknowledgment of the independence of the confederacy. Mr. Adams discharged the duties of this difficult diplomatic mission with such consummate ability as to win universal admiration. No more than his father or grandfather did he belong to the school of suave and crafty, intriguing diplomats. He pursued his ends with dogged determination and little or no attempt at concealment, while his demeanor was haughty and often defiant. His unflinching firmness bore down all opposition, and his perfect self-control made it difficult for an antagonist to gain any advantage over him. His career in England from 1861 to 1868 must be cited among the foremost triumphs of American diplomacy. In 1872 it was attempted to nominate him for the presidency of the United States, as the candidate of the liberal republicans, but Horace Greeley secured the nomination. He was elected in 1869 a member of the board of overseers of Harvard College, and was for several years president of the board. He has edited the works and memoirs of his father and grandfather, in 22 octavo volumes, and published many of his own addresses and orations.

John Quincy Adams, lawyer, eldest son of Charles Francis Adams, born in Boston, 22 September, 1833. He was graduated at Harvard College in 1853, and admitted to the Suffolk bar in 1855. During the civil war he was on Governor Andrew's staff. He was elected to the legislature by the town of Quincy in 1866, but failed to secure a reelection the following year because he had declared his approval of Andrew Johnson's policy. In 1869 and 1870 he was again a member of the legislature. In 1867 and 1871 he was democratic candidate for governor of Massachusetts, and was defeated. In 1877 he was chosen a member of the corporation of Harvard.--Charles Francis, Jr., lawyer, second son of Charles Francis Adams, born in Boston, 27 May, 1835. He was graduated at Harvard in 1856, and admitted to the bar in 1858. He served in the army throughout the whole of the civil war, and was mastered out in July, 1865, with the brevet rank of brigadier-general of volunteers. He has since devoted his attention chiefly to railroad matters, and in 1869 was appointed a member of the board of railroad commissioners of Massachusetts. In 1871, in connection with his brother, Henry Adams, he published "Chapters of Erie and other Essays." He has since published an instructive book on railway accidents. He was elected in 1882 a member of the board of overseers of Harvard College, and in 1884 president of the Union Pacific railway.--Henry, author, third son of Charles Francis Adams, born in Boston, 16 February, 1838. He was graduated at Harvard in 1858, and was his father's private secretary in London from 1861 to 1868. From 1870 till 1877 he was assistant professor of history in Harvard College, and was one of the ablest instructors the University has known during the present generation, possessing to an extraordinary degree the power of inciting his pupils to original work. He again resided in London for a few years, and is now living in Washington, District of Columbia, where he is writing a history of Jefferson's administration. He has published "Essays in Anglo-Saxon Law " (Boston, 1876); "Documents relating to New England Federalism, 1800-1815" (1877); " Life of Albert Gallatin" (Philadelphia, 1879); "Writings of Albert Gallatin," edited (3 vols., 1879); and "John Randolph" (Boston, 1882). --Brooks, lawyer, fourth son of Charles Francis Adams, born in Quincy, Massachusetts, 24 June, 1848, graduated at Harvard College in 1870, admitted to the Suffolk bar in 1873. He has published articles in the " Atlantic Monthly" and other periodicals, and is the author of "The Emancipation of Massachusetts" (Boston, 1886).