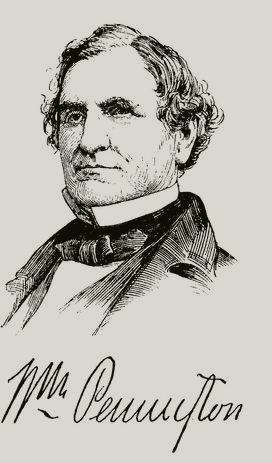 PENNINGTON, William Sanford, jurist, born in Newark, New Jersey, in 1757: died there, 17 September, 1826. He served as a major in the 2d New Jersey artillery in the war of the Revolution. He was admitted to the bar in 1802, was a member of the legislature, and appointed associate justice of the supreme court of New Jersey, 28 February, 1804, and he was judge of the United States district court in 1815-'26. He was governor of New Jersey in 1813-'15, and was also chancellor of that state. He published " New Jersey Supreme Court Reports" (1803-'16).--His son William, statesman, and governor of New Jersey, born in Newark, New Jersey, 4 May, 1796; died there, 16 February, 1862, was graduated at Princeton in 1813, admitted to the bar, and began practice in Newark. He was governor of New Jersey in 1837-'43, and at the same time was ex-officio chancellor of that state. During his administration the Broad Seal War occurred, a controversy which grew out of the congressional election of 1838, when six members were to be chosen by a general ticket in New Jersey. In two of the counties the clerks had rejected some of the township returns for real or alleged irregularities, and thus five of the Whig candidates received majorities which they would not have obtained had all the votes been counted. The sixth, having run ahead of his ticket, was elected beyond dispute. The governor and his council, in accordance with the law then in force, canvassed the votes, and to the six persons who had received the highest number, issued commissions under the great seal of the state. Congress, on convening, found that the five votes from New Jersey must decide the speakership, and this gave rise to a stormy debate, which lasted several days, and finally ended in the choice of John Quincy Adams as temporary chairman. He decided that all members holding commissions could vote; but the decision, being appealed from, was reversed and a resolution adopted that only the names of members holding uncontested seats should be called. On the twelfth day of the session Robert M. T. Hunter was chosen speaker, and on 28 February the five Democratic members were admitted to their seats. The subject was referred to a committee, which reported that the sitting members were elected. It was generally admitted that the governor had no option but to fill the commissions as he did. He was clerk of the United States district court in 1815-'26, and afterward declined appointments as governor of Minnesota territory, and as one of the judges to settle claims under the Mexican treaty. He was elected to congress as a Republican, served in 1859-'61, and was chosen speaker in February, 1860, after contest that lasted over eight weeks.--Another son, Aaron S., born in Newark, New Jersey, 17 January, 1800; died in Paterson, New Jersey, 25 August, 1869, attained reputation as a chancery lawyer, and was state senator and prosecutor of the pleas for Passaic county, and acting governor of the Society for establishing useful manufactures.--William Sanford's brother, Samuel, editor, born in Newark, New Jersey, 8 March, 1765 ; died there, 6 March, 1835, became in 1799 editor and one of the proprietors of the "Sentinel of Free-dom" in Newark, New Jersey Between 1810 and 1825 he was elected eleven times a member of the legislature, and was once speaker of the house. In 1827 he was a member of the state council.--Samuel's second son, Samuel Hayes, physician, born in Newark, New Jersey, 16 October, 1806, was graduated at Princeton in 1825, and has been since 1856 a trustee of that institution. In 1876 he was made president of the board of trustees of the theological seminary in the same place. He is the author of many contributions to medical science as well as of numerous addresses and papers on the subject of education and kindred topics.--Another son, Alexander Cummings Maewhorter, lawyer, born in Newark, New Jersey, 2 July, 1810; died in New York city, 25 January, 1867, entered the United States military academy, but after the expiration of two years he resigned his cadet-ship, studied law, and practised in Newark, New Jersey In 1837-'8 he was a member of the general assembly of New Jersey. In 1852 he was elected to congress as a Whig, serving two terms. For many years he was brigadier-general of New Jersey militia.