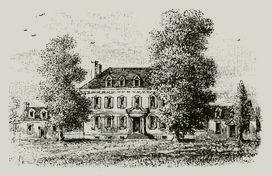 BYRD, William, colonial official, born in London in 1650; died in Westover, Virginia, 4 December, 1704. He was the son of John and Grace Stegge Byrd, of the family of Brexton, Cheshire, England. He came to America in 1674 as the heir of his uncle, Capt. Thomas Stegge, "gent." The inherited estate included the present site of Richmond, and some of the best land in Virginia. He married Mary, daughter of Warham Horsemanden, Esq., of Len-ham, Kent. Col. Byrd settled near the falls of the James, taking at once a prominent part in the affairs of the colony, and acquiring large wealth before the end of the century. He was a member of the council; of the house of burgesses, and was commissioned "receiver-general of his majesty's revenues for the colony," an office which he retained until his death. He was also, according to the Latin inscription on his monument, "armiger," or sword-bearer, which has been freely rendered "armorbearer to the king" in some translations of the inscription. His wife died 9 November, 1699.

The accompanying illustration is a view of the Byrd mansion, known as "Westover," on James river, which is still in the possession of his descendants. This mansion--one of the finest in historic Virginia--was built by Thodorick Bland, and purchased by the head of the Byrd family. The house is substantially constructed of red brick, and fortunately escaped serious damage during the civil war. The gate-posts bear the ancient arms of the family, and the interior of the house is elaborately decorated with wood-carvings in the early colonial style. Westover was for many years the county seat of Charles City county, and the court-house stood near the residence. In 1677, according to the historian Stith, Col. Byrd, being in England, was present at the sale of the effects of the Earl of Southampton, and purchased for sixty guineas a folio copy in manuscript of the "Records of the Virginia Company," from 28 April, 1619, till 7 June, 1624. It is the only record known to exist, the originals having been seized when the charter of the company was annulled in 1624. The manuscript descended from father to son, and was eventually found among Thomas Jefferson's books after his death, and so came into the possession of the United States government, which purchased Jefferson's library. A considerable part of the original collection was sold after the death of the third Col. William Byrd, and it is probable that Jefferson may have been the purchaser. It has been intimated, however, that Jefferson borrowed the manuscript for consultation, and died before returning it to its rightful owner.

--His son, William Byrd, born in Westover, Virginia, 16 March, 1674; died there, 26 August, 1744, was educated in England, and read law in the Middle Temple. Returning to his American estate, he took such an intelligent interest in the affairs of the colony that he became one of the most trusted and influential men of the time. He was thrice agent for the colony in England, succeeded his father as receiver of its revenues, and in due time was confirmed in the office by the crown. For thirty-seven years he was a member of the "king's council," as it was called, and eventually became its president. As wealth accumulated from his estate, he lived in princely style, adding to his father's collection, and acquiring the most valuable library then in the state. It comprised 3,438 volumes, a catalogue of which is still in existence. He was a wit, and something of a poet, as is proved by manuscripts in the possession of R. A. Brock, Esq., of the Virginia historical society. Col. Byrd (second) was the founder of Richmond, Virginia, which was laid out in April, 1737, by Maj. Thomas Mayo, was made a town in 1742, the capital of the state in 1779, and a City in 1782. He did much to encourage immigration, especially among the Swiss and Germans, and to this end he offered large tracts of land in Virginia and North Carolina from 1735 till 1740, making favorable terms to actual settlers. He was twice married: first to Lucy, daughter of Col. Daniel Parke, governor of the Leeward islands, and secondly to Marion, daughter and co-heiress of Thomas Taylor, of Kensington, England. He was one of the commissioners for running the boundary-line between Virginia and North Carolina, and was the author of important papers known as the "Westover Manuscripts." An edition of these was published in Petersburg, Virginia, in 1841 under the titles of " The History of the Dividing Line," "A Journey to the Land of Eden," and'" A Progress to the Mines." The style of these narratives has received the highest praise, and they are undoubtedly, among the most remarkable works of early American authors. Col. Byrd was a fellow of the Royal society of Great Britain, and a liberal patron of the arts and sciences.--The third of the name William was born 6 September, 1728; died 1 January, 1777. He was the eldest son of the second Col. William Byrd by the second marriage. He served as a member of the council of Virginia, and in 1756 was colonel of the 2d Virginian regiment in the old French war. He was twice married: first (in 1748) to Eliza, daughter of John Carter, of Shirley, James river, Virginia ; she died in 1760; secondly to Mary, daughter of Charles Willing, of Philadelphia, who survived him.

--Evelyn, daughter of Col. William (second), was born in Westover, 16 July, 1707 ; died there, 13 November, 1737, was taken to England by her father at an early age, and passed several years there, moving in aristocratic society, and winning fame for her wit, beauty, and accomplishments. Some of her court dresses are still preserved, and several portraits exist of her and of her father.

Start your search on William Byrd.