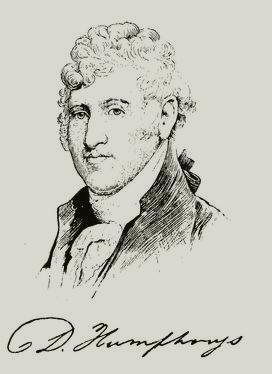 HUMPHREYS, David, poet, born in Derby, Connecticut, in July, 1752; died in New Haven, Connecticut, 21 February, 1818. He was the son of the Reverend Daniel Humphreys, a Congregational clergyman. After graduation at Yale in 1771, he entered the army under General Samuel H. Parsons at the beginning of the Revolution with the rank of captain. He was attached to the staff of General Putnam in 1778, and in 1780 was appointed aide-de-camp to Washington, which place he retained until the close of hostilities. At the siege of Yorktown he particularly distinguished himself, and was voted an elegant sword by congress for his gallantry. While in the army he wrote, with Joel Barlow and Timothy Dwight, stirring lyrics that were designed to stimulate and encourage the ranks. On the disbanding of the troops, Colonel Humphreys accompanied Washington to Mount Vernon, and remained a member of his family for nearly a year. It was owing to the influence of this patron that he was appointed in 1784 secretary of legation to Benjamin Franklin, John Adams, and Thomas Jefferson, who were sent to negotiate treaties of commerce and amity with European powers, he was absent on this mission two years, residing chiefly in Paris and London. Returning in 1786, Humphreys represented his town in the legislature, and joined with the "Hartford Wits" in producing the "Anarchiad" and other satiric verse. An edition of these edited by Luther G. Riggs, purporting to be "the first published in book form," appeared in New Haven in 1861. He was again invited to Mount Vernon, and resided there until the formation of the Federal government, when he accompanied Washington to New York, and remained a member of his family until 1790. In that year he was appointed the first United States minister to Portugal, and assumed his duties in 1791. He revisited this country in 1794, at which time he was given the general oversight of Barbary affairs, returned in 1795, and soon afterward married Miss Bulkly, an English lady of fortune. He resided in all seven years at Lisbon, and was then transferred to the court at Madrid as minister plenipotentiary, where he remained until he was succeeded by Charles C. Pinckney in 1802. At the beginning of the war of 1812, Connecticut appointed him to the chief command of the two regiments that were organized under the name of The "Veteran Volunteers," with the rank of brigadier-general. At the close of the war he retired to private life. On his return from Spain he had imported 100 merino sheep, and for some time he engaged in the manufacture of woollens. He received the degree of LL.D. from Brown in 1802, and from Dartmouth in 1804, and was elected a fellow of the Royal society of London. Colonel Humphreys wrote much in verse, beginning while in college. One of his poems, "An Address to the Armies of the United States " (1782), passed through several editions in this country and in England, and was translated into French. His others include one on "The Happiness of America," "The Widow of Malabae," a tragedy, translated from the French of La Pierre, and "Poem on Agriculture," His "Miscellaneous Works," (New York, 1790 and 1804) were dedicated to the Duke de la Rochefou-cauld-Liancourt, who had been the poet's friend during his residence in France.

Start your search on David Humphreys.