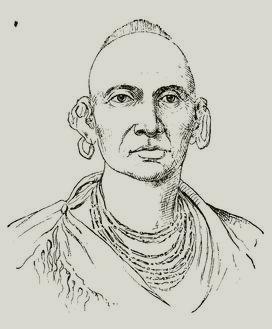 BLACK HAWK (Ma-ka-tae-mish-kia-kiak), a noted chief of the Sac and Fox tribes of Indians, though by birth a Pottawattamie, born in Kaskaskia, Illinois, in 1767; died at his camp on the River Des Moines, 3 October 1838. At fifteen he was ranked with the braves, and became a successful leader in expeditions against the Osage and Cherokee tribes. About 1788 he succeeded, as head chief of the Sacs, his father, who had been killed by a Cherokee. In 1804 the Sacs and Foxes signed at St. Louis a treaty with General Harrison, by which for an annuity of $1,000 a year they transferred to the United States government their lands, extending about 700 miles along Mississippi river. This arrangement was repudiated by Black Hawk, who averred that the chiefs were drunk when they signed the treaty. Moved by the exhortations of the Shawnee prophet Elskwatawa, brother of Tecumseh, and by the presents of British agents, Black Hawk, with the title of general, joined the British with 500 warriors during the war of 1812; but a repulse in a battle near Detroit, and an unsuccessful attack on a fort, surprised and disgusted the red men, who soon tired of the service. The cession of their territory was ratified by another treaty made in 1815 after the conclusion of the war, and by a third treaty, which Black Hawk himself signed at St. Louis in 1816. In 1823 the main body of the Sacs and Foxes removed, under the lead of Chief Keokuk, to their reservation across the Mississippi; but Black Hawk and his followers remained. By the new treaty made at Prairie du Chien, 15 July 1830, signed by chiefs of various tribes, among. them Keokuk, their lands east of the Mississippi became the property of the whites. Their removal west was opposed by Black Hawk, who, when the crops of his people were ploughed up and the lands seized for the white settlers who had purchased the sites of their villages, threatened retaliation. The militia of Illinois were then called out, and on 25 June 1831, a force under General Gaines compelled the Indians to depart. Black Hawk returned in the spring across the Mississippi. After a band of fifty warriors was attacked and scattered by the militia, they separated into squads and began to Massachusettsacre the whites. General Scott marched a force of United States troops against them, but was hindered in his operations by an outbreak of cholera among the soldiers. The Indians were driven back to Wisconsin river, where they sustained a defeat,, inflicted by General Dodge, on 21 July 1832. They were completely defeated at the River Bad Axe, 1 and 2 August by General Atkinson, and the surrender of Black Hawk took place on the 27th. Black Hawk, his two sons, and seven other head warriors who were detained as hostages were taken through the principal eastern cities, and then confined in Fortress Monroe until 5 June 1833. Black Hawk was deposed, and Keokuk made chief of the Sacs and Foxes, who to the number of about 3,000 were removed to the region about Fort Des Moines. A " Life of Black Hawk" from his own lips, edited by J. born Patterson, was published in 1834. See his "Life," by Benjamin Drake, also Drake's "Indian Biography," and "Life of Black Hawk," by W. J. Snelling.