Signer of the Declaration of Independence

GEORGE CLYMER was born in Philadelphia on March 16, 1739. His parents died when he was very young, leaving him to be brought up by a merchant uncle, William Coleman who, according to Benjamin Franklin, had "the coolest, clearest head, the best heart, and the exactest morals of almost any man I ever met with." Clymer's appreciation of philosophy and fine literature flourished under his uncle's roof. Clymer was educated at the College of Pennsylvania and then entered into his uncle's business. In 1765 he married Elizabeth Meredith, herself the daughter of a merchant. Clymer formed another partnership with his father-in-law and brother-in-law "Merediths & Clymer". He first met George Washington in his father-in-law's house and they formed a lasting friendship.

A modest man and cool on the surface, Clymer never sought public office, but for a score of years he was in almost unbroken public service, showing consistent republicanism and unusual warmth of devotion. An active Patriot from his very young manhood, he was one of the five elected to Congress from Pennsylvania for the first time in July 1776.

While no orator, this handsome man was well informed, a witty conversationalist, and a good writer. At the time of the signing of the Declaration, George Clymer was a prosperous merchant who was praised as one of the wisest of all delegates, excepting Benjamin Franklin. His "dearest wish" came to life when he signed the Declaration.

In December 1776, when Congress fled from Philadelphia to Baltimore, he and George Walton and Robert Morris remained behind to carry on congressional business. After the British victory at the Battle of Brandywine, British troops advancing on Philadelphia detoured for the purpose of vandalizing Clymer's home in Chester County about 25 miles outside the city.

Clymer, as a member of the first Congress under the Constitution remained loyal to his friend Washington, but tended to side with Madison against Hamilton. Clymer declined re-election and was appointed by Washington as head of the excise tax department for Pennsylvania. He found the office distasteful and resigned after his son Meredith, who was in the army dispatched against the Whiskey Rebels in 1794, died in Pittsburgh. Clymer was a member of the commission that negotiated a treaty in 1796 with the Cherokee and Creek Indians in Georgia. It was his last public service. In his retirement, Clymer devoted himself to fine arts and scientific agriculture. He had nine children by his marriage with Elizabeth Meredith, of whom five had survived infancy. George Clymer died at his Philadelphia home on January 23, 1813, nearly seventy-four years old. 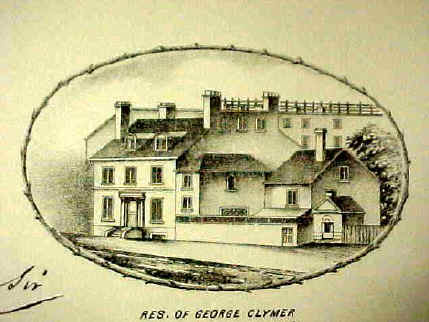 For a High-resolution version of the original Declaration

Start your search on George Clymer.